On Sunday, some of the UK's leading building performance experts joined Dr Wolfgang Feist and Witta Ebel of the Passivhaus Institute, visiting some of our latest domestic and non-domestic Passivhaus projects in London. The purpose of the visits was to review the last 12 months of data analysis and inspect the live data that is being produced, in order to check if Passivhaus is working in the UK climate. The unanimous agreement was that Passivhaus does indeed perform in the UK climate, providing extremely comfortable conditions throughout both winter and summer months, with energy savings up to 95% during the winter months! 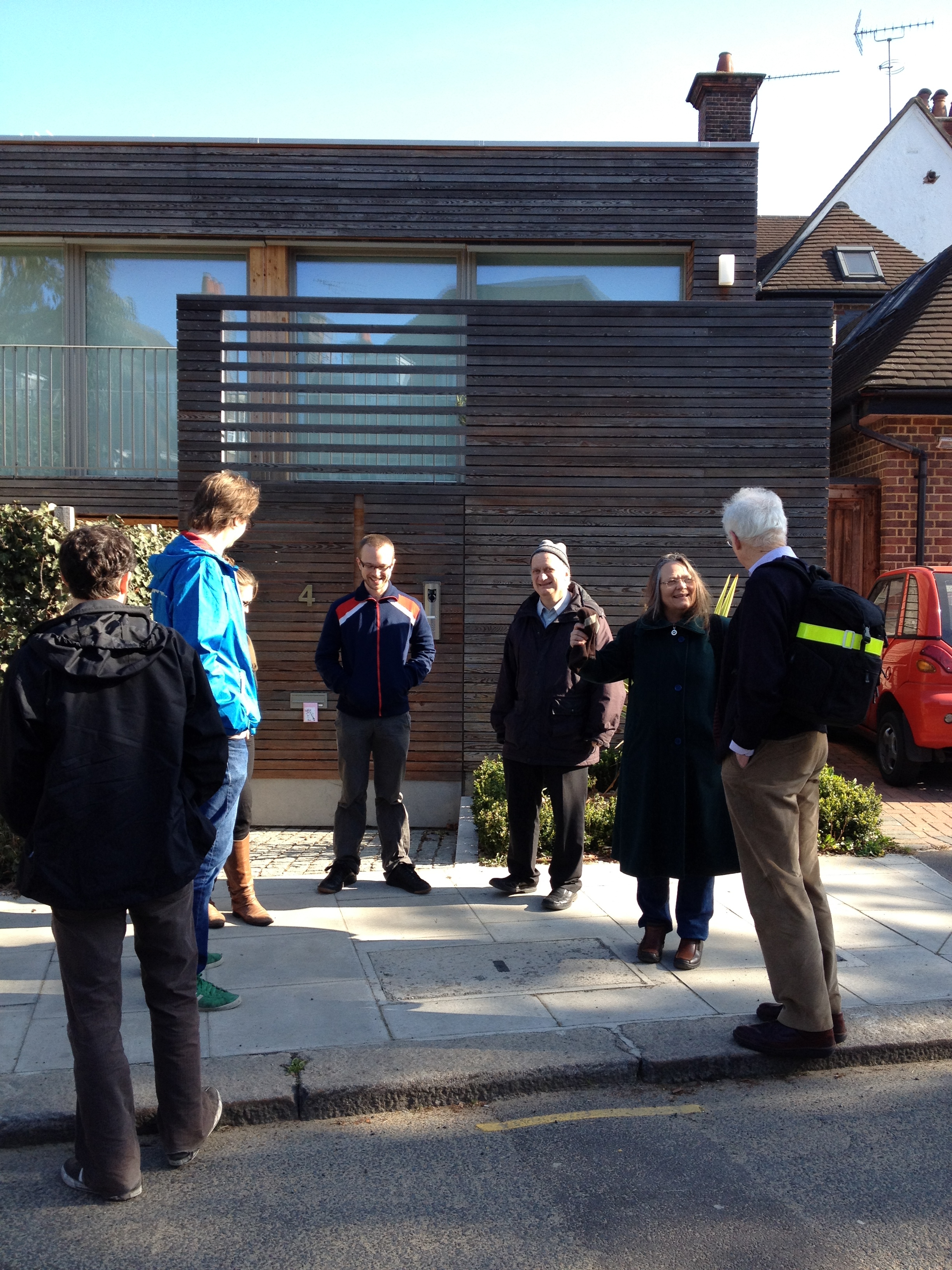 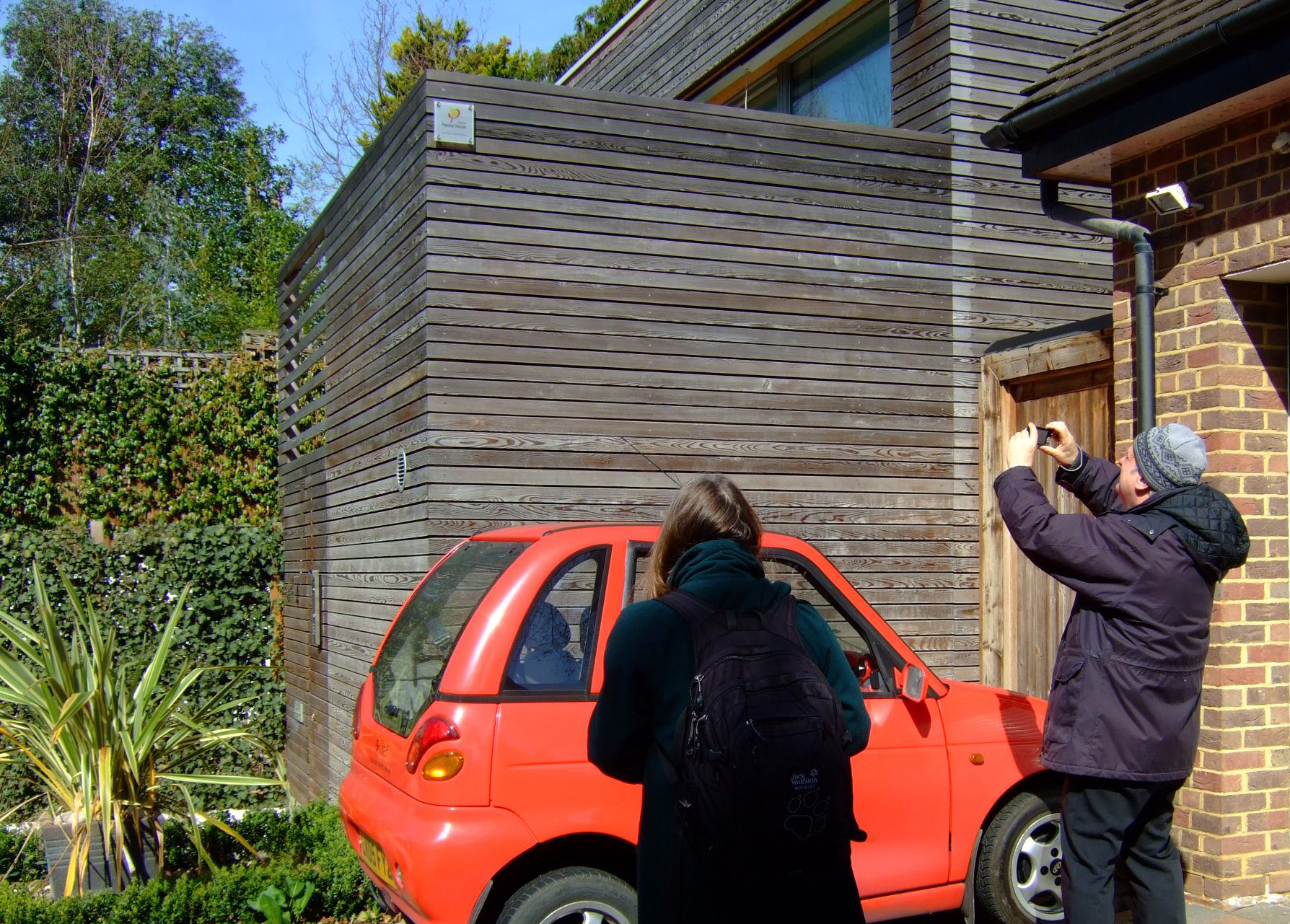 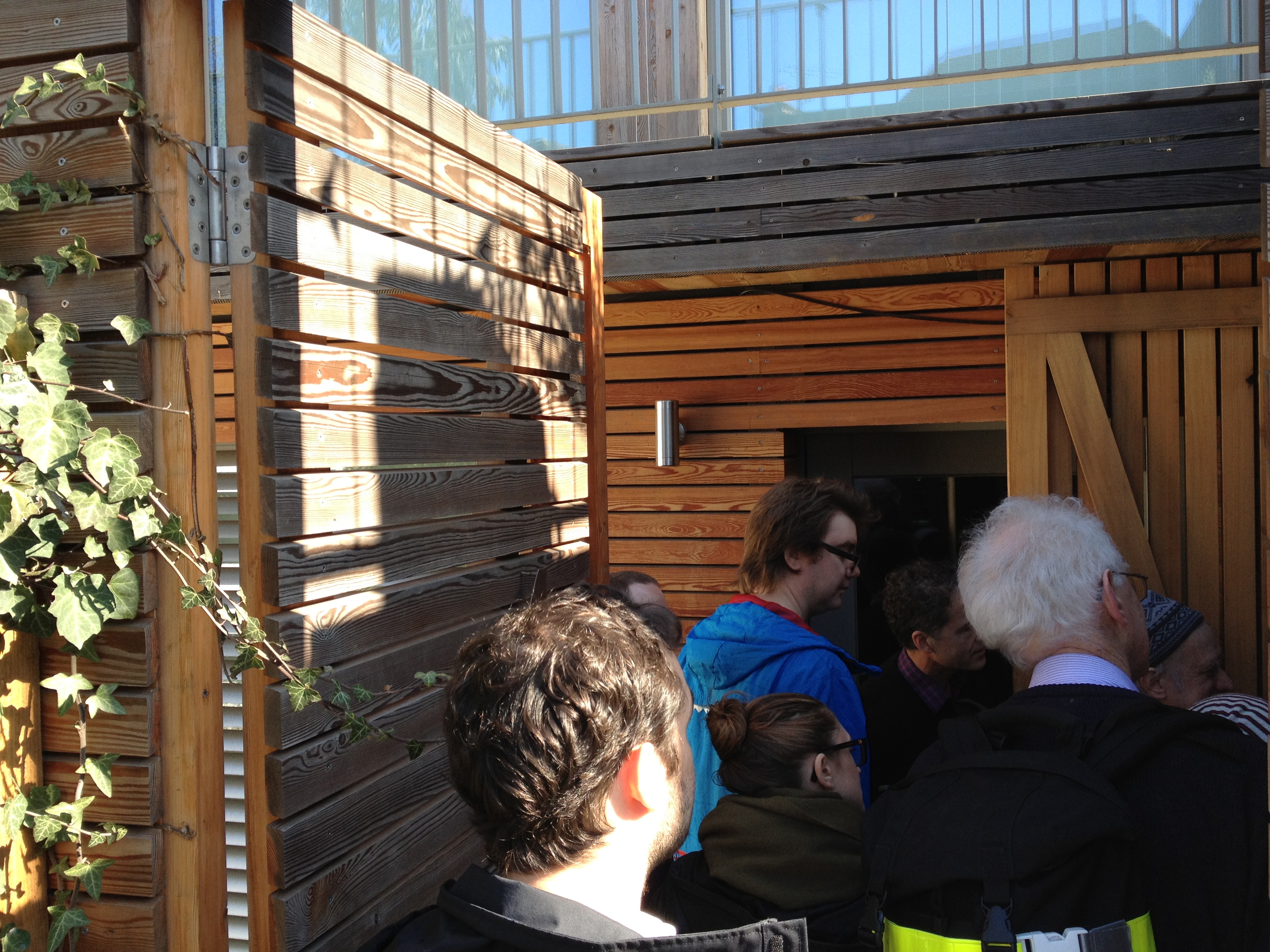 Wolfgang Feist (in woolly hat) leads the way in to inspect the Heat Recovery Ventilation system. It is located in the cycle store, in order to save space within the house. 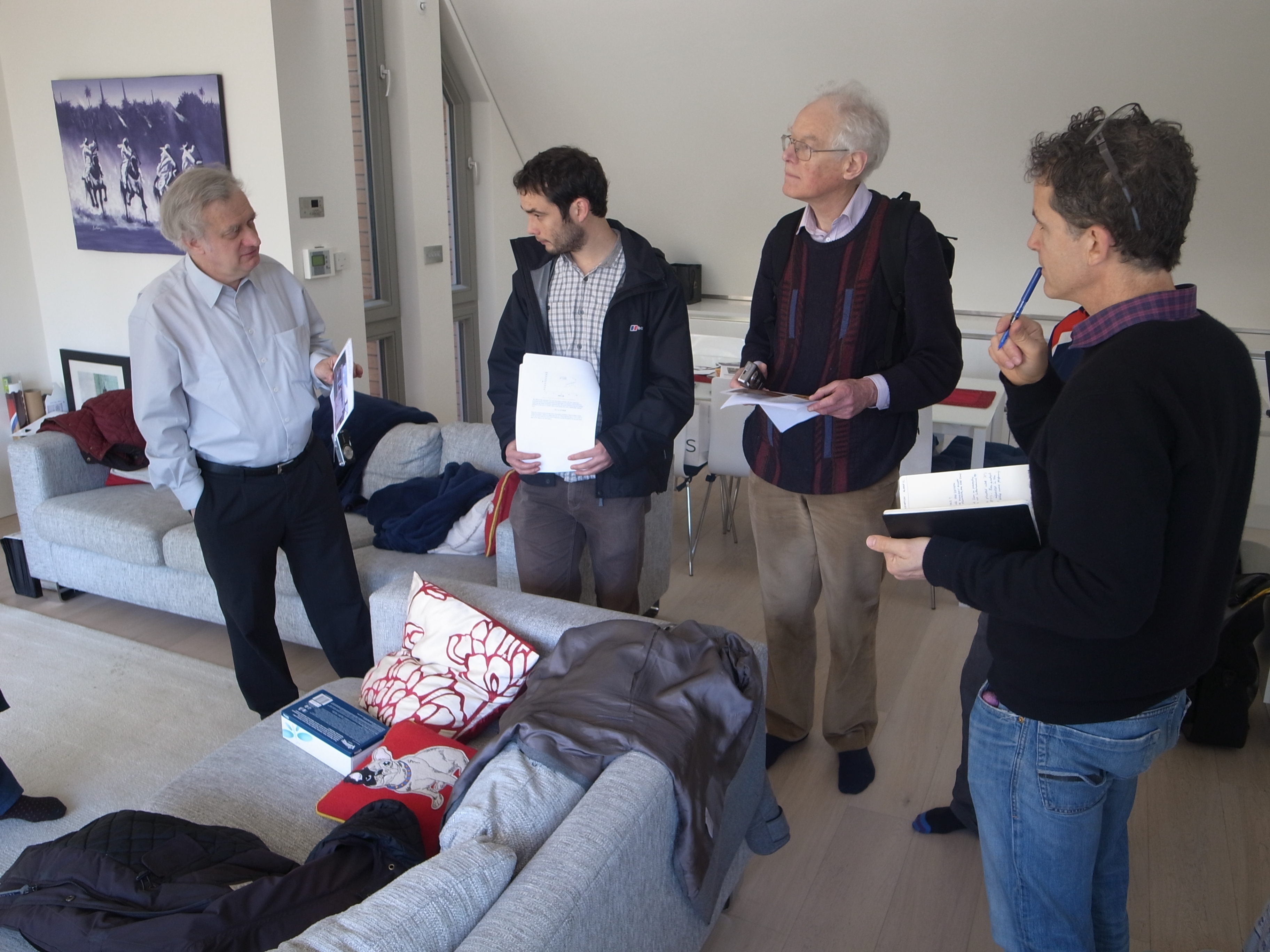 Sam explained that there are difficulties, however in carrying out a coheating test in such a low energy building because the slightest sun will warm the building and this effect will last many hours. Wolfgang suggested that a way to increase the accuracy of testing such a low energy building, is to a super-heat it to 30 degrees celcius as opposed to testing at 25 degrees, although this increases the risk of shrinkage cracking. 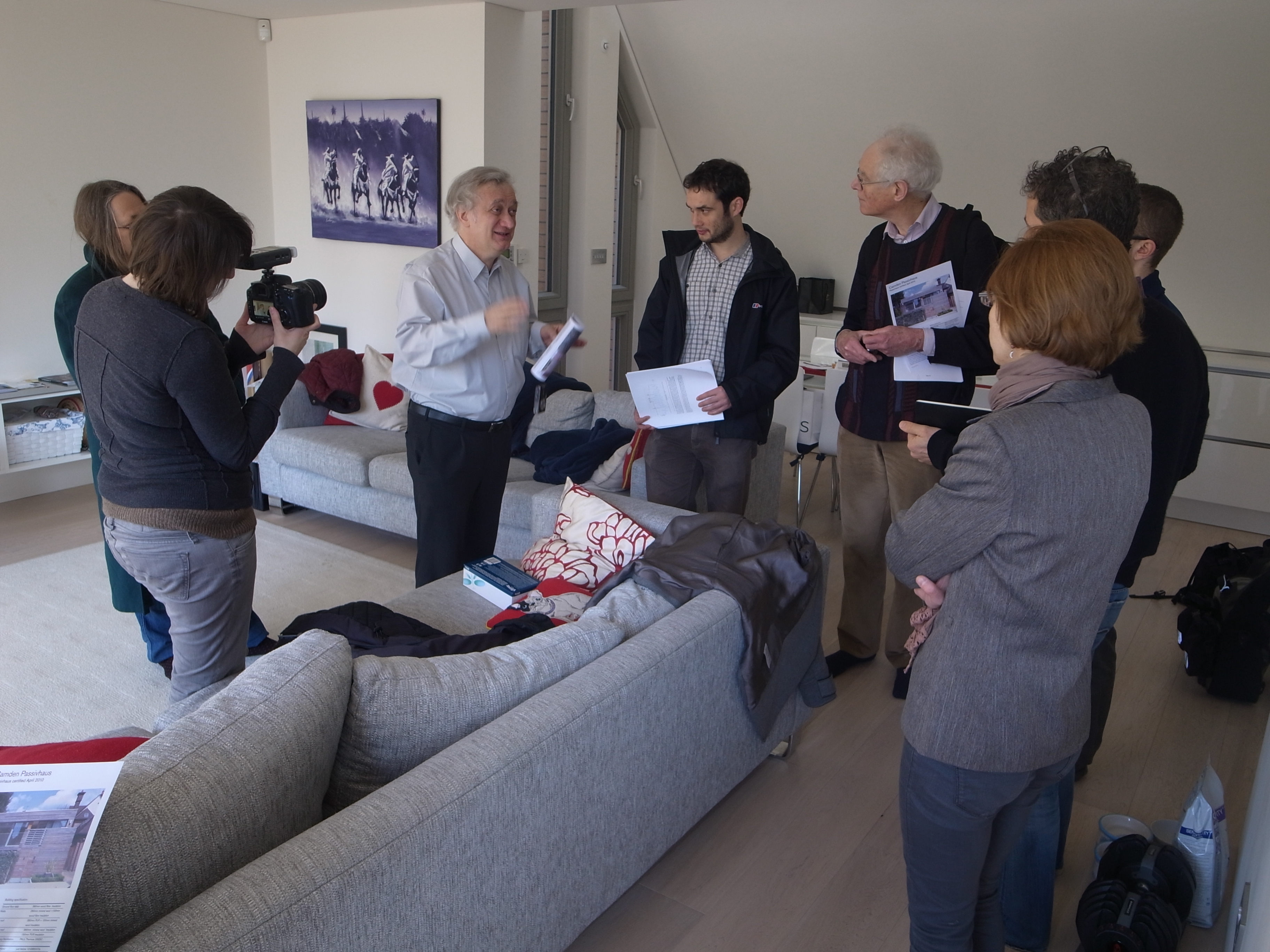 Dr Feist explains that co-heating tests were pioneered in the USA in the 1970's and early 1980's. Then the market changed and nobody was interested any longer in the results showing that buildings were performing so badly.

There was also an interesting discussion about the building owner's use of internal blinds in winter when she is at work, and the reduced solar gains resulting from this. Wolfgang estimated that the internal blinds were reducing solar gains by 30-40% in winter, and in spite of this, the building is using slightly less gas for heating than predicted within PHPP, showing how robust a Passivhaus can be, even when someone isn't using it optimally. 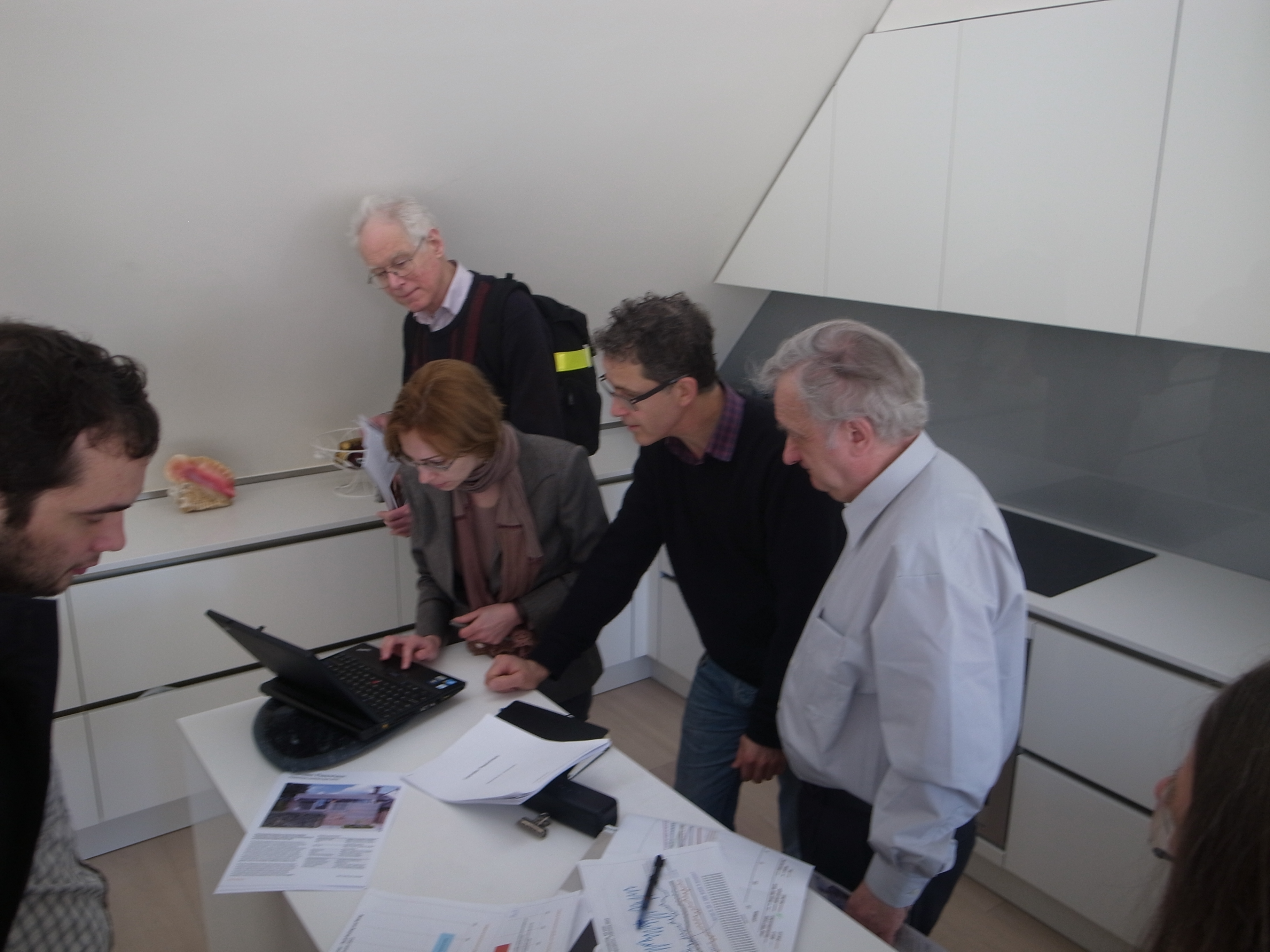 Diana Dina (bere:architects) produced graphs from stored and live monitoring data (courtesy of funding from the UK Technology Strategy Board) showing to the satisfaction of Wolgang Feist and Bill Bordass, how the operational performance of the building is delivering all the design expectations - and more! 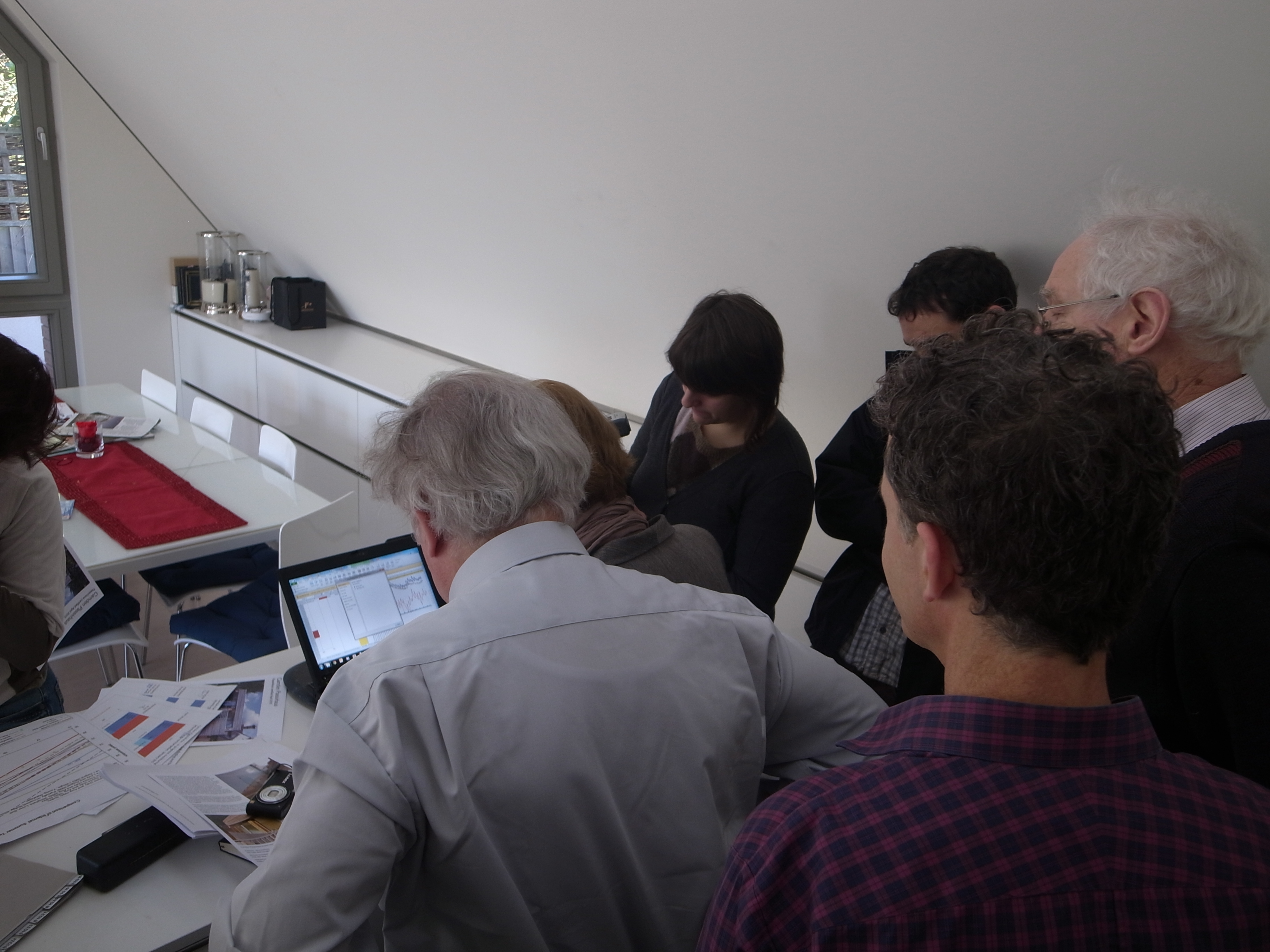 No pressure! Wolfgang and Bill standing over Diana... There followed a fascinating discussion about the benefits of simplifying and automating domestic passivhaus homes, particularly where the drivers are low cost and easy maintenance. Bill Bordass and Wolfgang Feist shared some interesting ideas about small HVAC units and 'gas circulators' from the 1960's, solar buffers & electric top-ups.

Finally Bill Bordass guided us through the results of the Building User Survey (BUS), a concept that he developed with Mark Way, and now carried out commercially by Arup. This method of objectively analysing the comfort and user satisfaction of buildings was of great interest to Wolfgang, and Bill explained that the Arup report (funded by the Technology Strategy Board) shows that the Camden Passivhaus scored the highest marks in terms of overall comfort, compared to all the other houses in its benchmarking class.

That's excellent news for a building that also uses more than 80% less energy than usual in new buildings in the UK, and effortlessly complies with the planned 2016 Zero Carbon standard.

A tour of the Mayville Community Centre, an existing building retrofitted to the Passivhaus standard, was followed by a picnic lunch in the community garden, enjoying products from the local farmer's market under the warm sun of an early summer.

Bill Bordass said how delighted he was to see a building performing so well, with up to 95% energy savings over its first winter. Bill seemed genuinely cheered to see that some architects are at last listening to his advice, and Wolfgang Feist and Witta Ebel were delighted that the Passivhaus methodology is performing brilliantly and giving such comfort and  pleasure to occupants in the UK climate!

After his latest UK visit, Dr Feist was able to conclude:
(1) the Passive House Standard works perfectly in the UK with excellent user satisfaction and outstanding (objective) comfort criteria
(2) the expected (heat) energy consumption values according to PHPP calculations – around 15 kWh/(m²a), i.e. around 20% of „standard“ buildings – are also achieved in practice