Co-heating tests are the ultimate scientific test of a building's fabric energy efficiency. The building must be unoccupied for at least 7-14 days in overcast winter conditions. External and internal monitoring equipment is installed, and electric heaters are installed to maintain a constant set temperature. All other equipment is switched off, and a precise account of the energy consumption is recorded over the test period. After adjusting for external conditions, the measured heat loss coefficient is established, and can then be carefully compared to design predictions.

Researcher Sam Stamp noted in his executive summary: "...the Camden Passivhaus is one of only a few co-heating tested dwellings that meets its design intent." In his conclusion, Mr Stamp states: "This is a good reflection on the design and build quality of Camden Passivhaus and lessons from this process could be taken forward to ensure more buildings had as-built performances closer to design."

By 2010, a team at Leeds Metropolitan University had assembled a substantial body of co-heating test results on a selection of UK buildings. Led by Jezz Wilkinson, the results mostly exposed a serious gap between design aspirations and actual performance, as shown in the graph below. The buildings are not identified because the University's anonymity guarantees don't permit the naming of the numerous under-performing buildings tested. In this context, the graph below illustrates how significant the co-heating tests are, that were carried out on our Larch House, Lime House and Camden Passive house. All three of bere:architects' buildings, uniquely, met their design targets, and performed between two times and five times better than the buildings listed in this table presented by Sarah Birchall to the BSRIA AGM in 2011 (below). More general info on co-heating tests here:  agm-2011-co-heating-tests-sarah-birchall-3.pdf 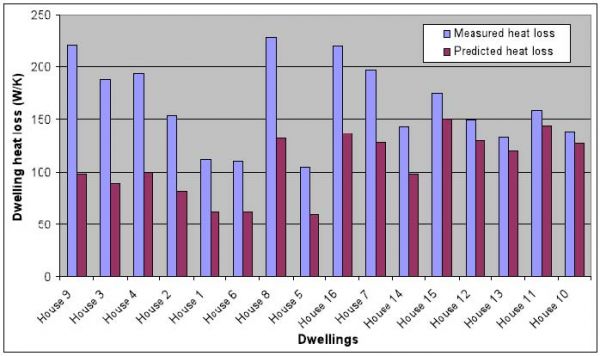